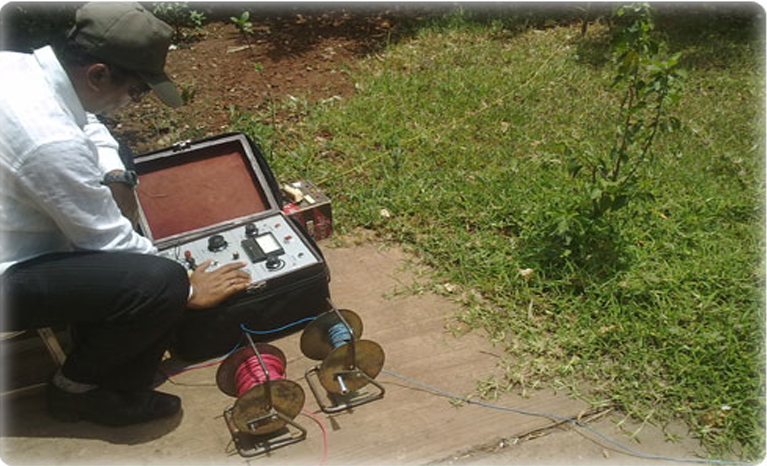 As you must know Rain Water Harvesting - is the activity of collection of water. It can be either store for direct use or can be recharged into the ground. As studied above, while dealing in second part of the definition that – “it can be recharged into the ground”. Resistivity test is the key factor. As we know the underground strata broadly it is - soil then Murom layer next is the Hard Murom & then the Basalt or in some cases it is marine clay & basalt.

Normally, run-off or even Roof top can be recharged in ground up to the Murom level. The gaps which developed in basalt can be effectively used as natural water storage tank in Mumbai area.

To find out these gaps in Basalt, Soil Resistivity Meter is used. Proceeding further, there are 2 types of survey method.
1) 2 Pin Method
2) 4 Pin Method

In this method, considering the plot, 1st electrode is fixed at the centre of the plot & 2nd electrode is moved at periphery of the plot are equal-distant. And the points at which we get the lowest resistant count, which point is suppose to have a fracture in the basalt. In order to find out at what dept that gap is developed, we have to conduct a 4 Pin Survey Method.

Applying the formula,
P = 2πa R
Where, a = the horizontal distance between the two probes [m]
R = Resistance value obtained by resistivity meter.
By this, we can find at which level the gaps have developed in the basalt.

A resistivity meter is an electronic device used to measure the flow of electric current through the ground from probes inserted at regular intervals. Resistivity is defined as the amount of resistance to current flow, therefore the device can determine different soil compositions based on the readings. These meters are used for soil surveys, locating ground water, and even surveying for underground structures.

A resistivity meter can determine the location of underground structures or artifacts. The electrical resistance of soil changes with the introduction of open areas such as buried rooms or graves. An electrical resistivity survey is prepared by placing probes in regular patterns. Differences in the meter readings will show the presence of objects underground that are different from plain soil.